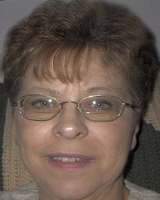 Jean "Jeannie" Prince-Lipinski, of Antigo, passed away suddenly Wednesday, October 14, 2020. She was 71 years old. She was born in Antigo, August 1, 1949; a daughter of John and Thelma (Tomlin) Stewart. She married Franklin Lipinski on August 7, 2004.
Jeannie was a graduate of Elcho High School with the class of 1967.

She enjoyed genealogy, was an extremely talented craftswoman with wood-working and sewing, a genius in trivia games, an avid reader, and a devoted sports fan of the Milwaukee Brewers, the Green Bay Packers and the Wisconsin Badgers. Most of all she loved being with family and friends.

She ﬁlled many roles throughout her life such as cooking at the Ma-Ka-Ja-Wan boy scout camp in Pearson, chief of the Pickerel Area Rescue Squad, and for the past 18 years as a waitress at Two Angels Family Restaurant in Antigo; where she would greet you with a genuine smile, and entertain you with her charming wit and sarcasm. But the most signiﬁcant and important roles in her life were as a sister, a mother, a grandmother "Oma" and a great-grandmother.

Jeannie was world-renowned for her humor, not holding back her opinion and a knack for telling it like it is. She always told you the truth even if it wasn't what you wanted to hear. She was real, genuine and authentic. Conversation came easy to her and she always made an impression and made friends wherever she went. She was genuine to a fault, with the biggest, caring lioness heart; and yet sugar-coated nothing. She was always there with words of encouragement, wisdom and comfort; a woman who would give you her shoes and the coat off her back (literally). You always knew where you stood with her and would never have doubted her love.

All who knew her and loved her will always remember her humor, wit, tenacity, and undying love for them.

She was preceded in death by her parents; and two brothers, David Stewart and Robert Stewart.

A family celebration of Jeannie's life will be held at a later date.

Got to know her at Two Angels. We compared family trees and exchanged resources. Also enjoyed discussing Miss Marion Stewart who I had for a Fourth Grade teacher at 6th Ward grade school. RIP Joyce Payne

We got to know her at Two Angels. She was a wonderful person and will be missed. My condolences to the family.

Jean was a funny, wonderful lady. She will be missed. My thoughts and prayers to the family.

Going into 2 angels with my hubby Bob and he teasingly said to her if you sing you'll get a bigger tip. She started to sing. An amazing lady will miss her. Love you Christine . Aunt Rose

I will always remember you singing to me, “Me-shell, my bell”. Rest easy, friend ❤️

I will always remember you singing to me, “Me-shell, my bell”. Rest easy, friend.

Jeannie was my favorite waitress at Two Angels. I loved her witty remarks and sense of humor.

To Jeannie's friends and family; Our deepest sympathies; No Obituary could be truer; She was (is) all that was described; RIP

The services for Jean have not yet been added. Please sign up below to be notified when the services are ready.

The attached photos are added to the memorial of Jean "Jeannie" Prince-Lipinski to help share their legacy.

Thank you for sharing your memory of Jean