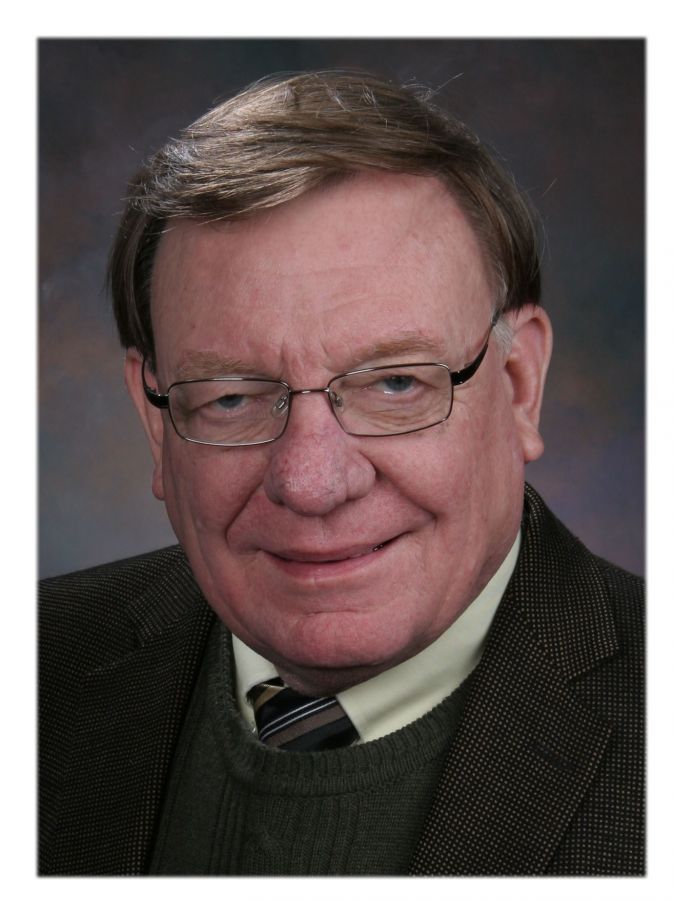 On Monday, Nov. 25, 2019, Fred Berner woke up at 4 a.m.-just like he did every Monday through Friday- pulled on his pants and sweatshirt, tied his shoes, opened the garage door, backed his car out, and drove to the Antigo Daily Journal office to begin what became his final minutes of life, at the desk he had occupied with such dedication and determination for more than four decades.
Kay Schroeder-who readers of Bits and Pieces recognize from the many times Fred mentioned her in his column-found Fred when she arrived at the Journal office at 6:30 Monday morning to begin her final week of work. It was to be Fred's final week as well, as he had sold the newspaper to Adams Publishing Group in June. Kay was Fred's faithful friend and companion for more than 40 years.
Fred was 71 years old.
Fred grew up in the offices of the Antigo Daily Journal, which was being operated by his father, Artemas, and his uncle, Henry. He called the newspaper "his sandbox," and spent long hours in the plant, fiddling with type, and later, working as a paper carrier, in the press room and taking photographs.
Fred had the distinction of being the only publisher of the Antigo Daily Journal to have a degree in journalism. He received the bachelor's degree in journalism from the University of Wisconsin-Eau Claire in 1970.
Following graduation, his first job took him to Hartford, where he worked as editor of the Hartford Times-Press before returning home in 1972, to work with his mother, Marie Berner.
Fred was the last of a long line of Berners to lead the Antigo Daily Journal from its beginnings in 1905. All of them, including Fred, were leaders in the community and dedicated to publishing a quality newspaper.
Fred was especially proud of being one of the leaders of the United Way campaign in Antigo. He served on the Wisconsin Newspaper Association Board of directors for many years and was a longtime member of the board of directors of the M & I Bank,
While Fred loved being a journalist-with his camera always within reach-he enjoyed helping others in a "behind the scenes" way. He did not seek attention with his generosity and he lived a modest yet vibrant life, filled with Kay Schroeder, family, friends and fun.
Frederick A. Berner was born in Antigo on May 15, 1948, to Artemas and Marie (Flynn) Berner. At the time, his father was publisher of the Antigo Daily Journal, the position he held until his death in 1963, when Fred's mother, Marie, took the helm of the paper. Fred became publisher upon his mother's death in August, 2011.
Fred was a graduate of Antigo High School with the class of 1966. He was honored with the Distinguished Alumnus Award in 2013, offering remarks at the commencement ceremony.
Survivors, in addition to Kay Schroeder, include his sister, Mary Jo Berner, Eagle River; niece, Betsy Ross, Denmark; nephews, Russell F. (Deborah) Ross, Jacksonville Beach, Fla., John Ross (Stephanie), DePere, Flynn and Fletcher Ross, Nashville,Tenn.; and his Antigo Daily Journal family.
Visitation will be held at the Bradley Funeral Home Friday, Nov. 29 from 3 to 7 p.m. and Saturday, Nov. 30 from 9 to 10 a.m.
A funeral mass will be held at 10:30 a.m. Saturday at St. John Catholic Church in Antigo with Rev. Charles Hoffmann officiating.

My deepest sympathies to Fred's family and loved ones. Fred and I were born a day apart at the Langlade County Hospital. As my mother told the story, when the day came for her to take me home, a nurse handed Fred to her instead! She quickly rectified the mistake but a bond between Fred and I was formed, I think from that moment on. I left Antigo at age 14 but visited 40 years later with my sisters when we stayed at our old cottage on Bass Lake. Fred's cottage was one cottage away and we spent an afternoon catching up and reminiscing about the good old days. I'll never forget how special that was and I'm very saddened to hear of his passing. Fred will always have a special place in my heart. Linda (Murray) Page

Our deepest sympathy to Kay,Mary Jo and family. What a loss for you and for the Antigo area. How fitting that he left this world doing what he loved. Prayers formally you. Sincerely Bob and Nancy Hunter.

I first met Fred back in the middle 70's while rafting on the Wolf River. Fred and I shared an interest in the Model A Ford right to the end. . We spoke about a month and a half ago about some issues he was having with his Model A. He was going to call me when he had some time and see if we could get it running. His free time was limited over the years with all the various functions and news events he reported on and took pictures at. It was a sad day when I learned he had passed away. His final hours were spent on what he loved to do ..........
Keith Svoboda

Fred was one of the best! Will sure miss him around. Did so much for our community. We were hoping that Kaye and friend could visit us in Fl. Kaye you deserve a wonderful vacation after all your hard work at the journal. So sorry this happened too Fred. Blessings too you, MaryJo, and family. Jamine & Terry Kretz

Kay and Mary Jo and Family,
Please accept our thoughts and prayers. We lost a very special cheerleader for Antigo and things just won't be the same.
Dick and Penny Hurlbert

Prayers for Kay and the Berner family. His presence was a fixture at all activities in Antigo.

I really enjoyed working with Fred during my time in the community and as mayor from 2005-2008. His sister wrote that the Antigo area had lost its greatest champion, and I couldn't agree more. That is how I will always remember him...as a relentless cheerleader for the community that he saw as his family!

Will miss seeing Fred on our return trips to Antigo from Texas. We always got caught up on what was happening while sitting on the corner stools in the Dixie. We talked with him just two weeks ago when we were there to attend a Packer Game and he was in good spirits and kidded that he might hide some things at the paper so the new guys would have to call him back in. he WILL BE MISSED Scott and Jean (Ourada) VanDerhei

Our thoughts and prayers go out to your entire family. The Antigo Daily Journal was and still is a staple item in our family. We have enjoyed many years as neighbors.

There were a lot of losers Monday morning. The community of Antigo lost a stalwart promoter. The Dixie Lunch lost a customer. And so very many of us lost a long time friend. RIP, Fred. RIP. Mike Worman

I have Known Fred most of my life,I delivered papers for him when I was a kid,and as luck would have it he ended up being our carrier! All of us at Clark's Auto enjoyed all the great stories and conversations we had with Fred! We will miss him very much, I think the entire community will miss Fred! God Bless All during this sad time!

So sad to hear about the passing of Fred. He was a professional and very caring person and will be missed.

My thoughts and prayers go out to the entire family. Enjoyed growing up with Fred and we shred some great times. He will missed by many. Born

Our thoughts and prayers are with Kay, the Berners, and the entire Antigo Daily Journal family!! We loved visiting with Fred about family and especially off road racing! We will surely miss the warm smile and sense of humor! RIP Fred! 🙏🏻

I called him Uncle Fred for many years, then he was Bossman Fred when I delivered papers for the Journal, then after college, coming home, he was just Fred, and visiting him was the highlight of my visits to Antigo. Coming home will not be the same, as my buddy can't reply to me or tell me funny stories about Antigonians. This one really hurts. Fred made me a better person. He made me proud of my hometown. I know many around town feel the same way. God bless you, Fred! Gonna miss you so much.

Fred will definately missed by the entire community of Antigo. Also by those who work and have worked for the Antigo Daily Journal ! I know that Karl and I wil miss him as well ! We want give our condolences to all those that are realated to him and especially Kay Schroeder his best friend !

last night I posted a picture of me and my two boys posing with my 11 point buck that I shot in 1999, I knocked on Fred's door he opened it and was going to immediately invite me in and then he looked down and seen all the blood on my pants and Boots and I laughingly said I will just wait out here he laughed and said yes okay. He was truly a great guy and is going to be missed very much. Love and prayers to family

I remember Fred as a supportive friend. In particular I recall a day at work when Fred told me it wasn’t just a job, we’re family! He was always amazing with the Journal. My love and condolences to Kay and all of Fred’s family and friends.

Our thoughts and prayers to Kay, MaryJo, extended family, the Journal staff and the Antigo community. Fred was so faithful to serving the community by producing one of the best papers around, but also giving his time to others. He will be greatly missed! Jeanne and Jim Peters

Fred was such a great friend of my mom and dad(and therefore me). He was family. I have many good memories but the annual meeting under the grandstand at the fair is the best. Won't be the same without Fred and my dad. They are together...Also my mom often sent me the bits and pieces articles to keep me grounded with Antigo news in the big city. Many sympathies to his family and friends... Kay we love you!

Coming to work will never be the same. I will miss joking with Fred. He always had something to say or he'd just give me this funny look. My son's who are very young were very sad to hear of his passing. Fred always joked with them as well.

May the Lord comfort Fred`s family and friends. Prayers for you all!

The attached photos are added to the memorial of Fred Berner to help share their legacy.

Please help memorize Fred Berner by recording your attendance below.

Thank you for sharing your memory of Fred